Aviation for the rest of us!

the only print magazine that focuses on personal aviation every issue!

UltraFlight was also the first of the aviation media to develop a regularly broadcast radio show dedicated to powered sport aviation, the UltraFlight Radio Show. That show was created in 2000, before iTunes or iPods were even introduced. The show grew with the technology to remain at the forefront of aviation reporting in the sport aviation market until the show went into hiatus in 2011.

UltraFlight grew with the ultralight and light sport aviation movement to what it is today, the only newsstand quality magazine (and now the only magazine at all!) completely devoted to the fun and adventure of single and two-seat powered sport aviation. In January of 2010, UltraFlight Magazine became Powered Sport Flying Magazine. The name change was made to reflect the larger audience and the full range of what the magazine had already grown to cover.

Today Powered Sport Flying Magazine remains one of the few magazines that is read cover-to-cover by subscribers. Powered Sport Flying offers an independent voice on government regulation as well as showing what many magazines forget, the true joy of flight. It does this by showing the adventures of people from around the country and around the world enjoying the freedom of flight. With excellent print quality, great editing and stunning photography, it is a great way to stay informed about a great sport.

These organizations have made Powered Sport Flying Magazine a member benefit.

The Light Aircraft Manufacturing Assoiation's mission is to provide its membership representation to government, associations, and other entities. They also participate in voluntary consensus standards, quality assurance audits, and other technical services. They also promote member products.

The Popular Rotorcraft Association is the home to fans of personal rotorcraft such as gyroplanes and helicopters. They are well known for their annual convention in Mentone, Indiana.

The United States Powered Paragliding Association's mission is to preserve, promote and enhance the sport of powered paragliding. A paraglider is a foot-launched inflatable wing. It is easy to transport, easy to launch, and easy to land!

Here are some recent examples of our work. 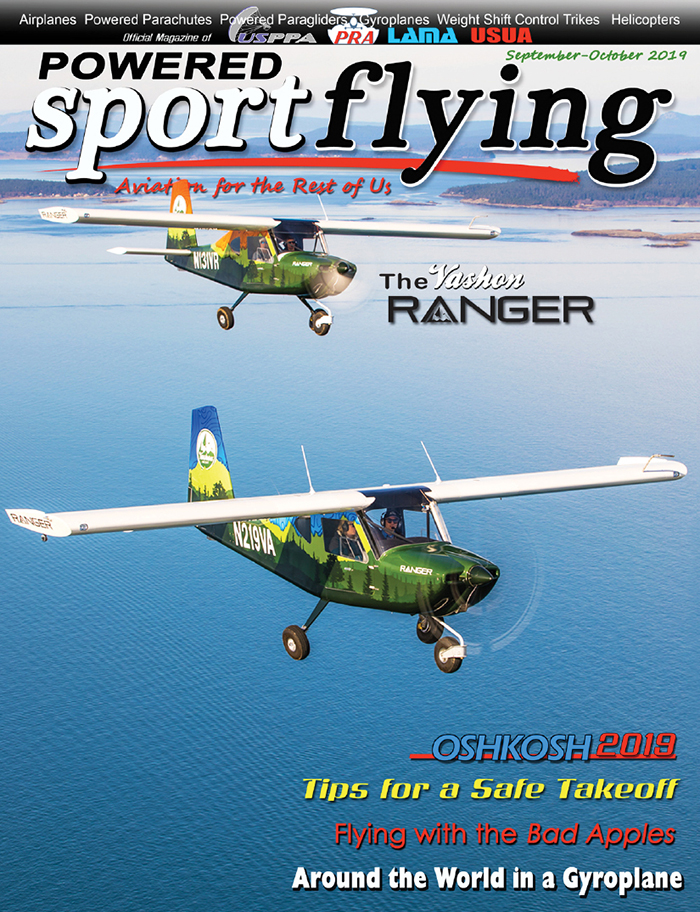 Featuring the Vashon Ranger on the cover

Catching up with James Ketchell

Tips for a Safe Takeoff

Incidents: Is the Rack Enough

Final Approach: Hating on the E6B 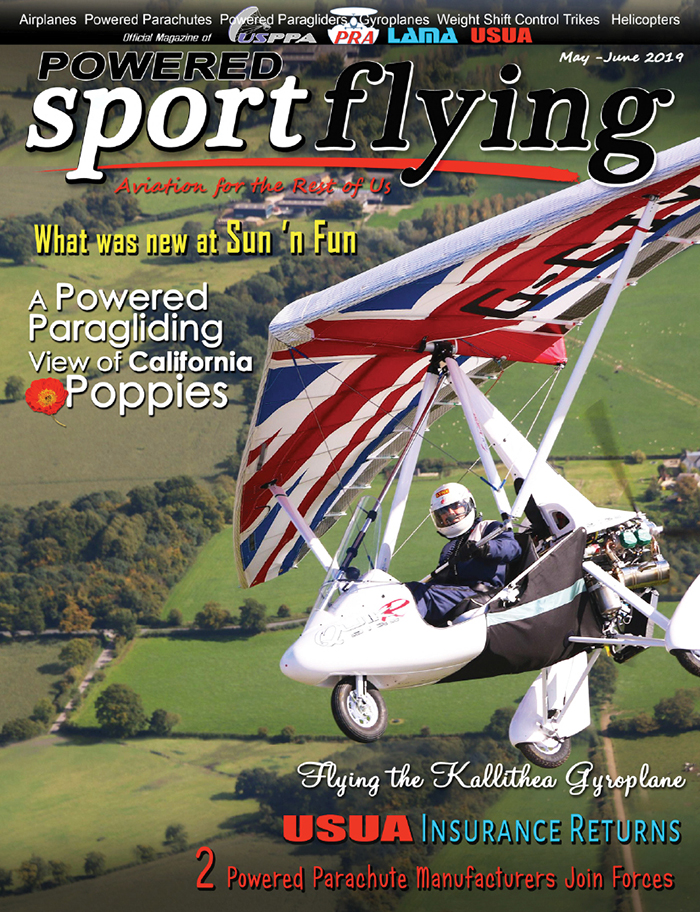 Featuring the P&M QuickR on the cover

California Poppies from a PPG 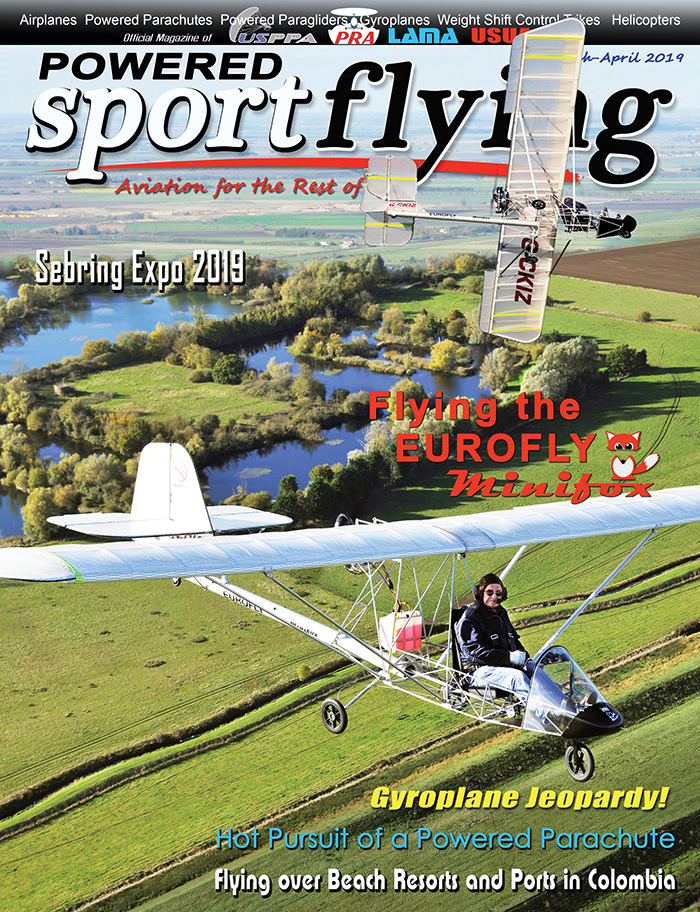 In Hot Pursuit a Powered Parachute

Your First Flight of the Season

Final Approach: Insuring That Your Insurance Sticks Around 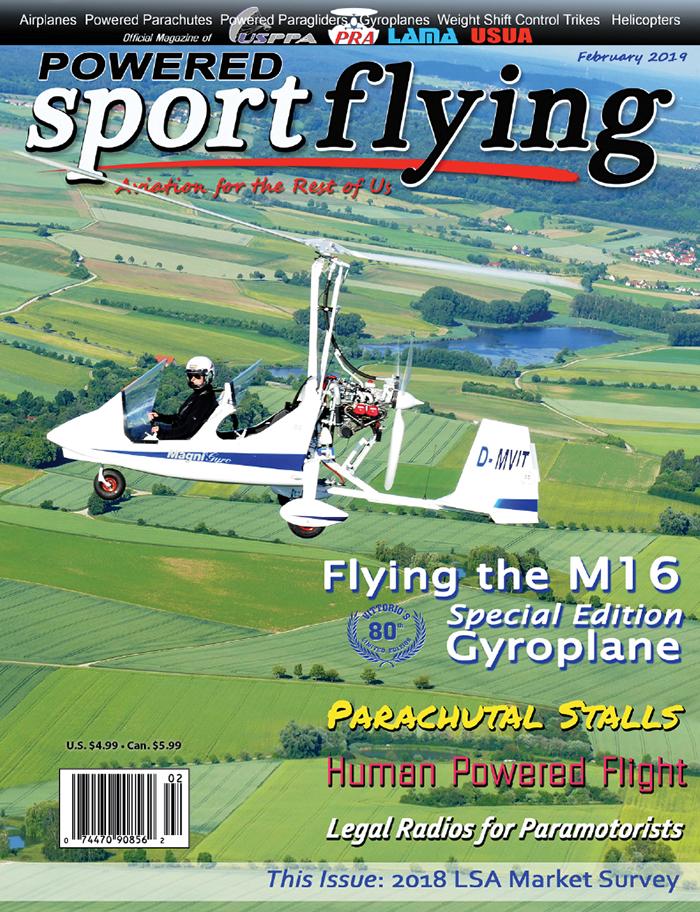 Featuring the Magni M16 Special Edition Gyroplane on the cover

In Memory of Marion Springer

My Two Unplanned Engine-Off Landings in a Powered Parachute

Are You Ready to Get Your Pilot Certificate? 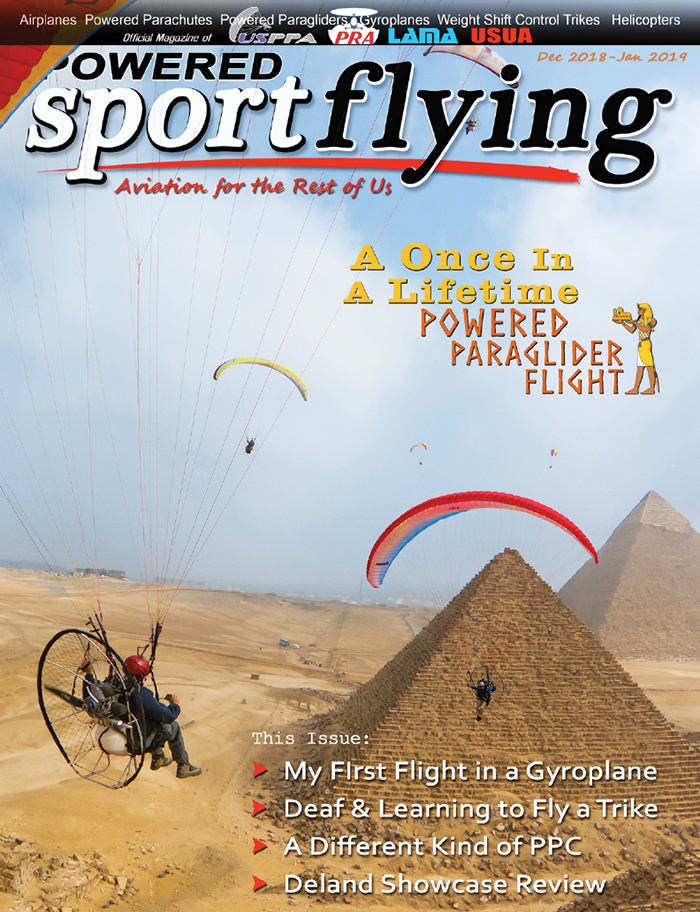 How I Learned to Fly Weight Shift

First Flight in a Gyroplane

Incidents: This Will be Fun 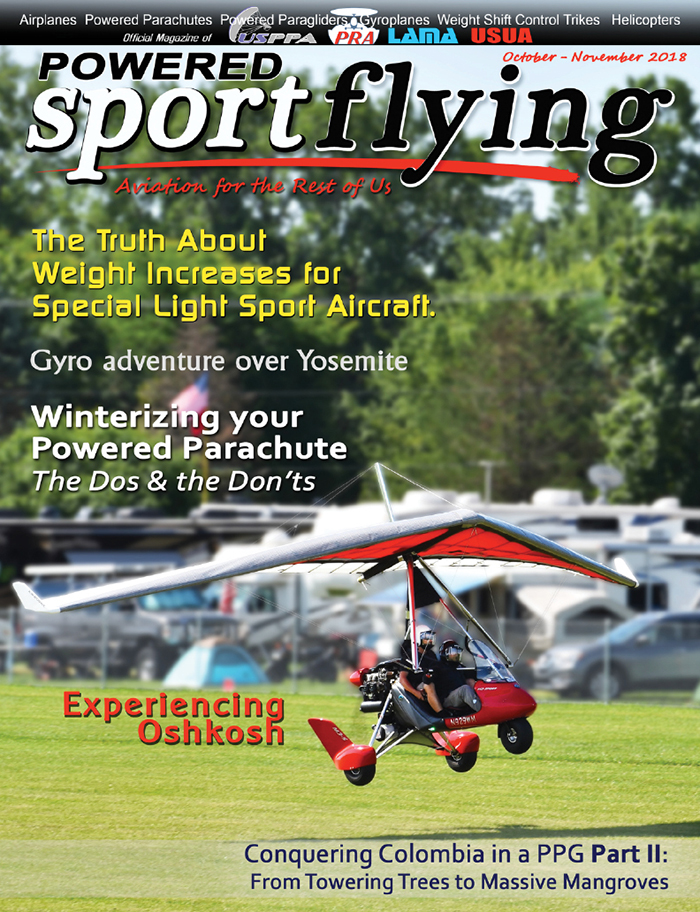 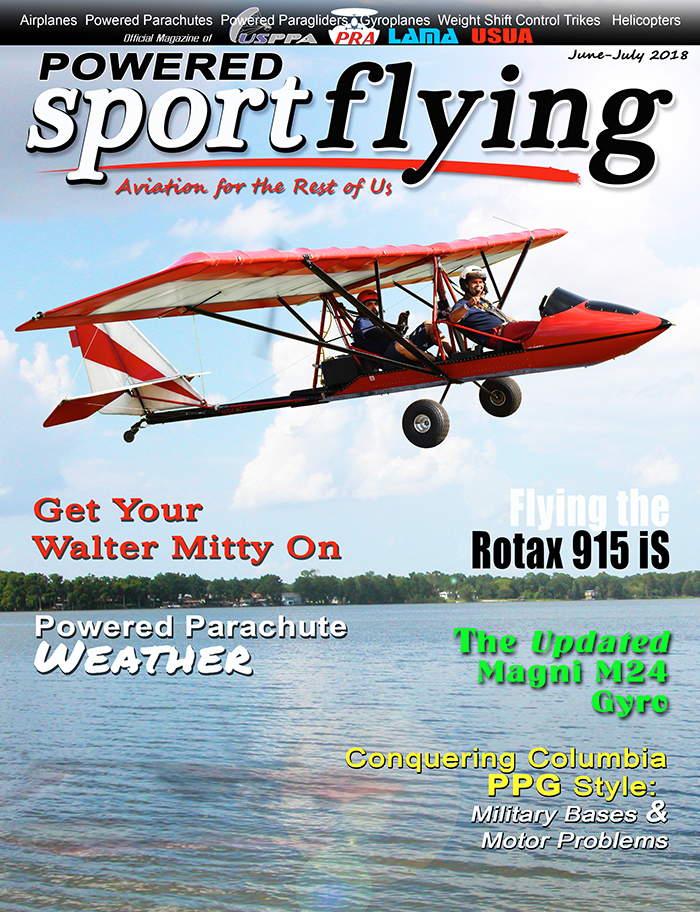 Incidents: Narrow is the Path

Swing Set Aviator: Random Thoughts and a 'Wakeup' Call from a Flock of Geese 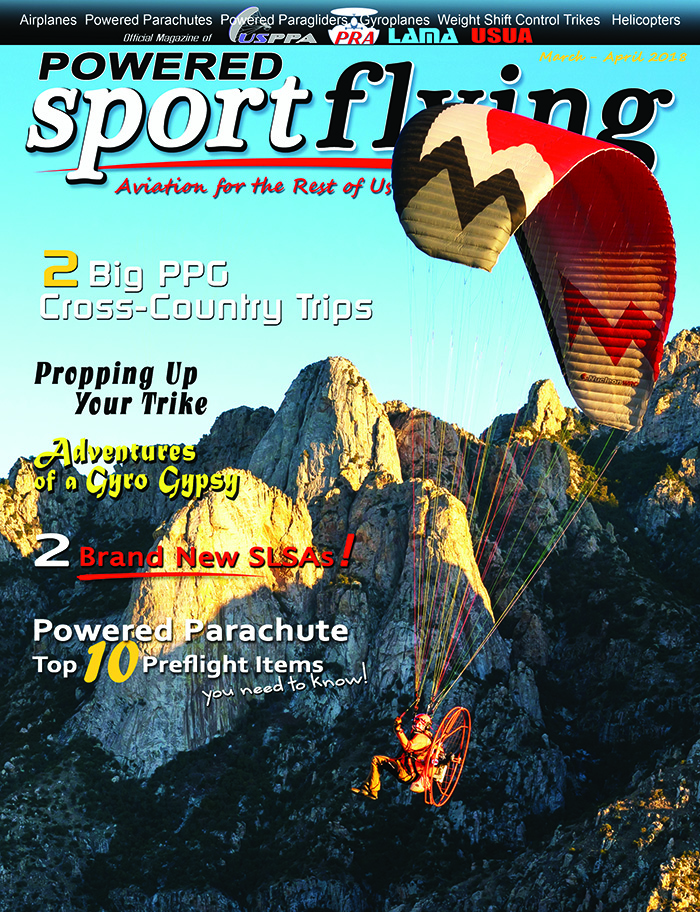 Trike Upgrades: A New Prop for my Trike

Final Approach: It Isn't the Message, It's the Medium 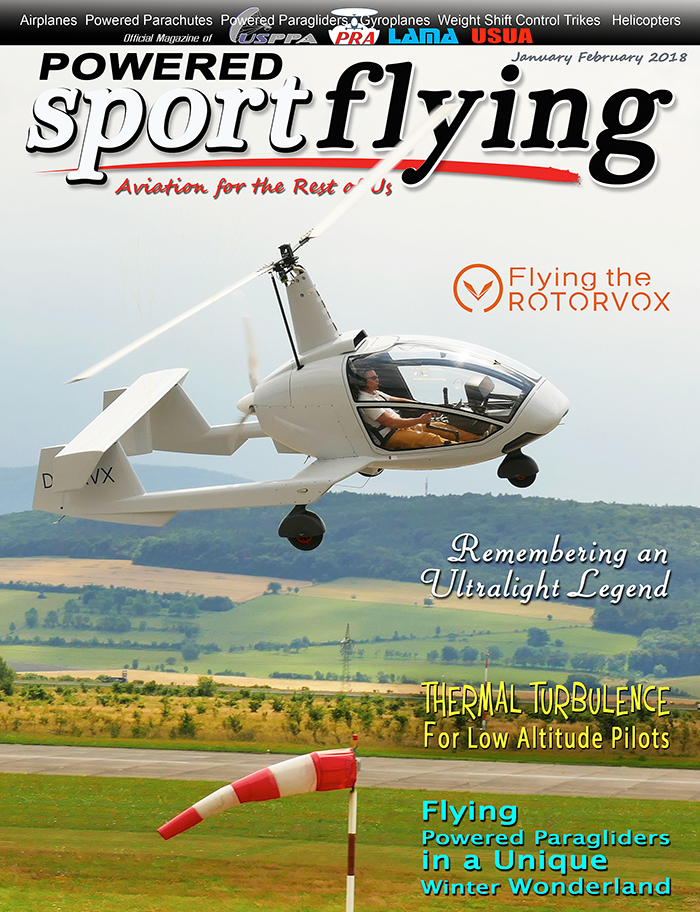 Featuring the Rotorvox Gyroplane on the Cover

Swing Set Aviator: Nervous Maintenance: How to Get Over the Fear of Maintaining Your Gear Featuring a Trike Pilot and Passenger on the Cover

Weight Shift Control Trikes: First Trike Flight - How to do it Right!

Powered Parachuting With a Purpose: Flying Missions in the Third World 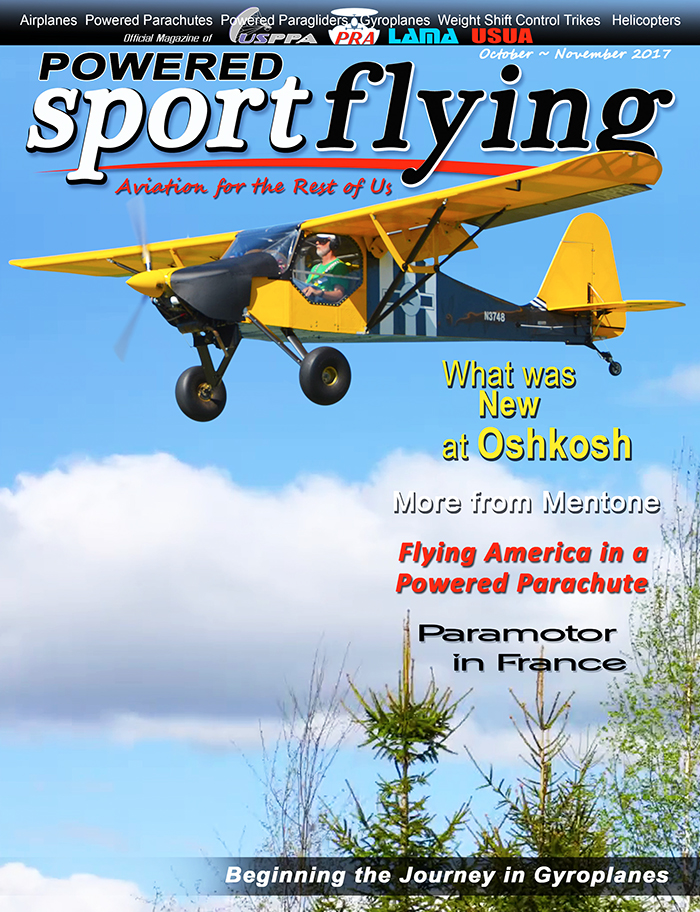 Featuring Belite's Chipper on the Cover

Getting Started in Gyroplanes: Flying Gyroplanes–Decision Making to Take-off and Beyond: The Journey Begins Featuring the Kitty Hawk Flyer on the Cover

2017 Arizona Flying Circus at Motown: Flyin’ to the Fly-in 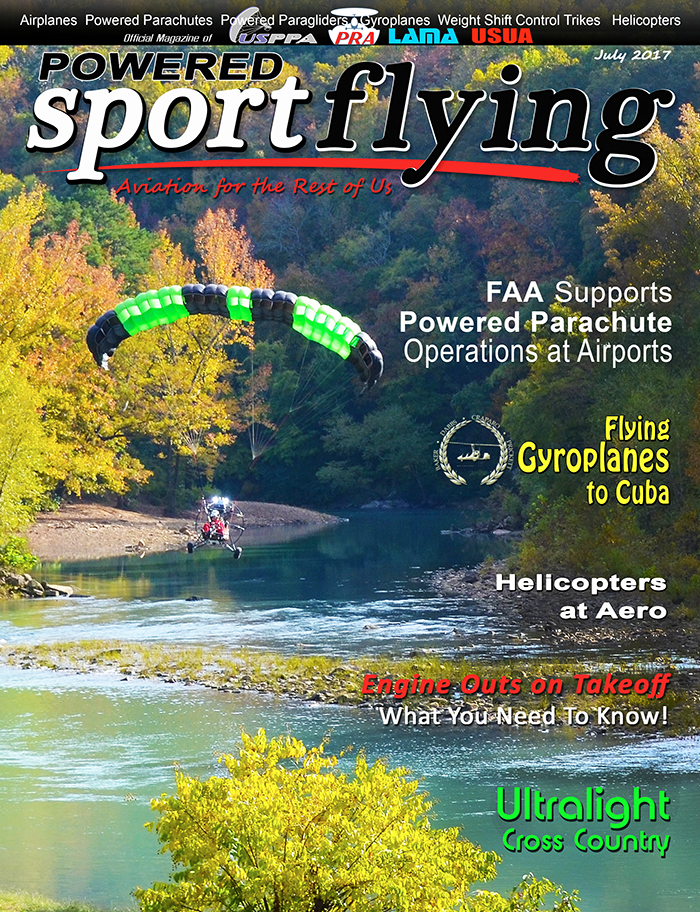 Featuring a powered parachute flying in Arkansas on the Cover 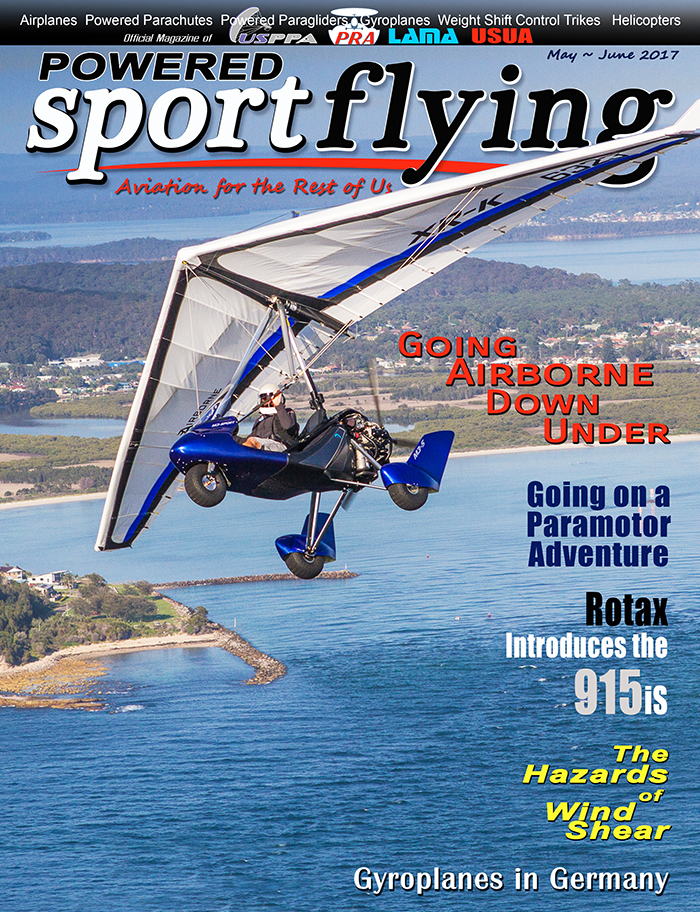 Featuring an Airborne Trike on the Cover 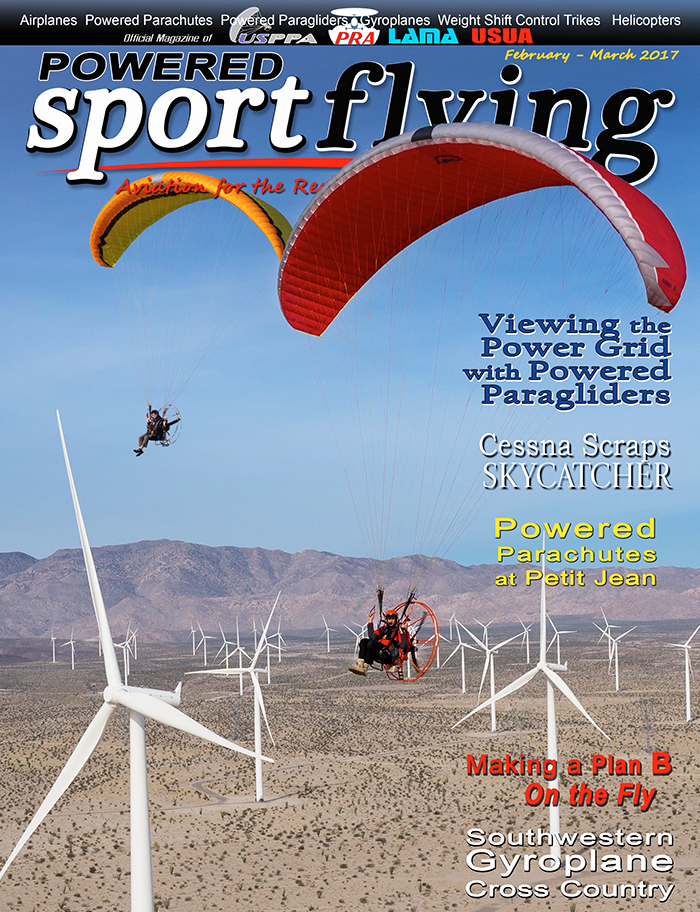 Featuring Powered Paragliders over California Windmills on the Cover 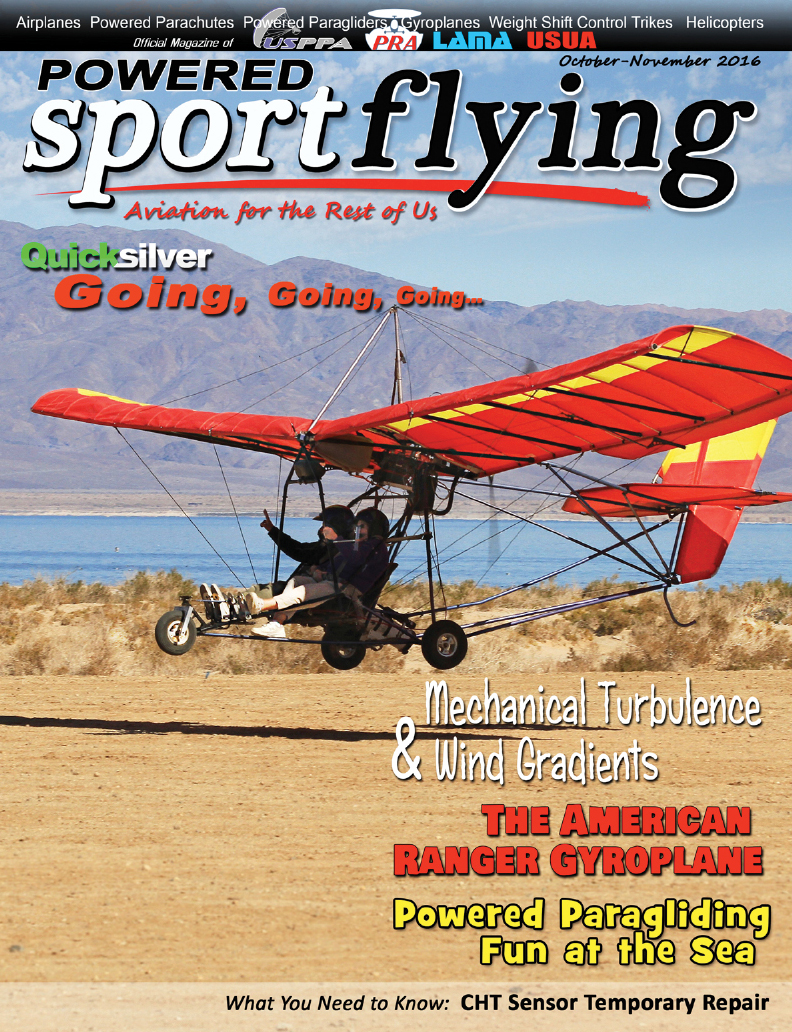 Featuring the Quicksilver on the Cover 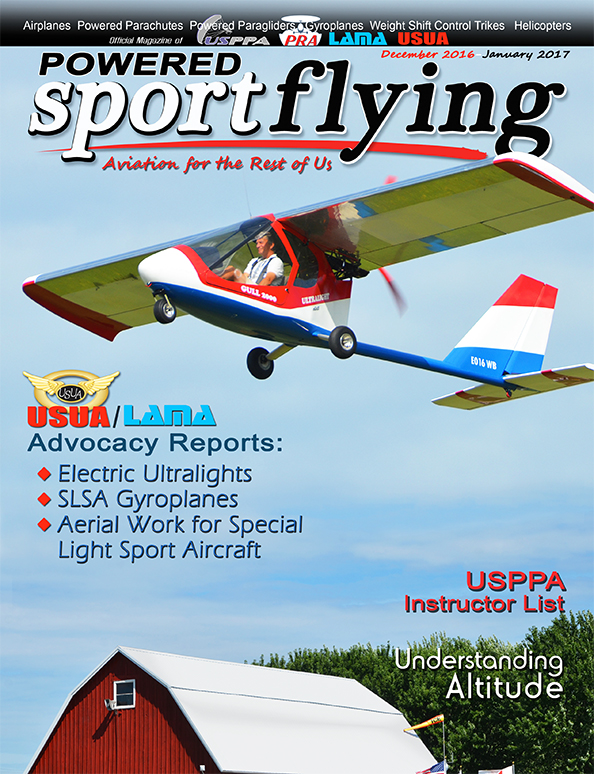 Featuring the Earthstar eGull electric ultralight on the Cover Featuring the SkyRunner on the Cover 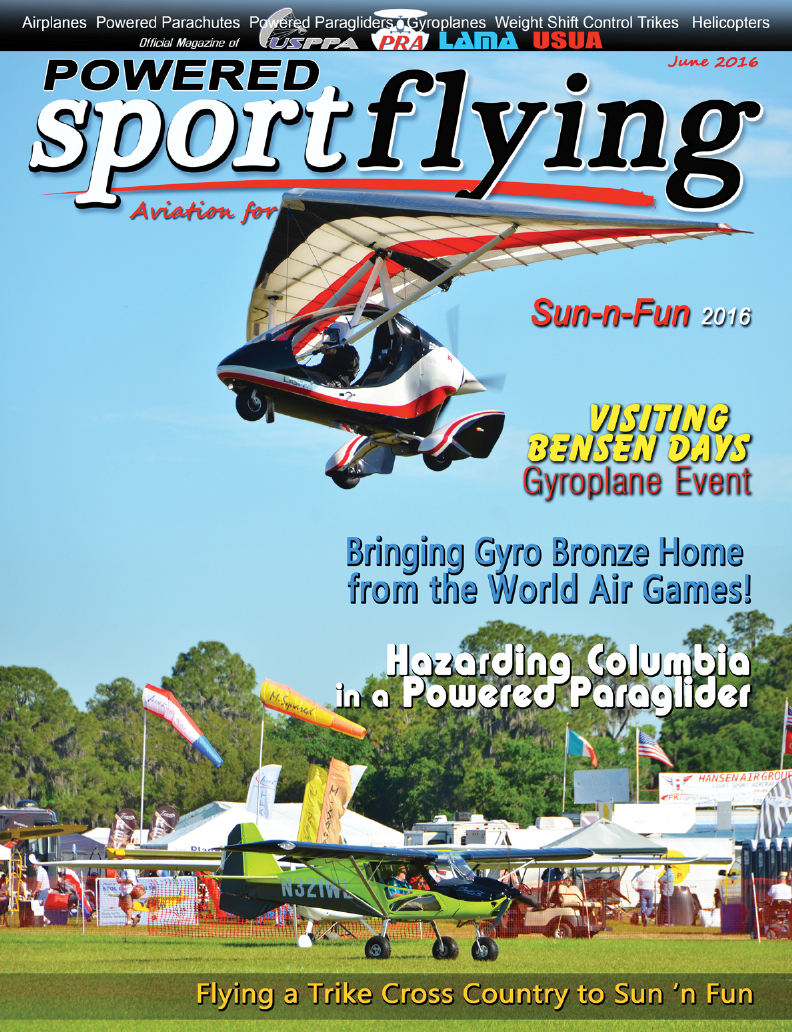 Featuring the P and M Pulsar on the Cover

Sun 'n Fun 2016 Debrief and Summary; Atlanta to Sun 'n Fun in a Trike; Competing at the World Air Games; Bensen Days 2016; I Already Fly an Aircraft with a Built in Medical Disqualifier; Experienced Pilot Hand Chop; Panama to Columbia in Powered Paragliders: Part I Featuring the Magni Gyroplane on the Cover Featuring Powered Paragliders on the Cover Featuring the Hummel on the Cover

Being a Tram Operator at AirVenture; Mentone 2015; Misconstrued Altitude; Modifications; Endless Footdrag and the 2015 USPPA Competition; Toxic Waste Ponds, Trash, Sewer, and Earthquakes... Sounds Like a Great Place to Fly! Featuring a Powrachute Pegasus Powered Parachute on the Cover Featuring the Autogyro gyroplane on the Cover 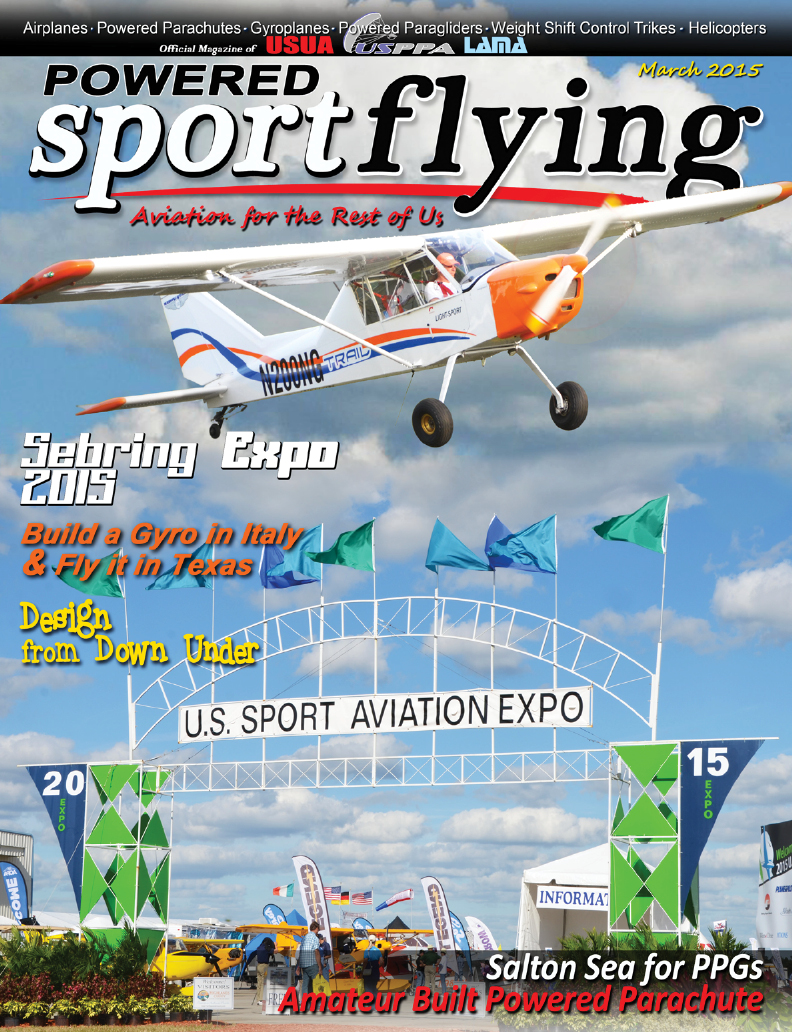 Featuring the Groppo Trail on the Cover The Flying Show; Lucille; The (Trike) Wing is the Thing Part 3; The Solving of an Autogiro Mystery; The Forces Acting on a Powered Parachute; Filming and Flying and Confessions; Powered Paragliding in Panama Part III: Alone Featuring a powered paraglider on the Cover Featuring an Air Creation trike on the Cover Featuring and ultralight on floats on the Cover

AirVenture 2014; KidVenture; Rotorcraft Journey: Building Flying Skills and Friendship; Gretna Fly-In; Staying out of the Powerlines; The Kamikazes Return to the Dominican Republic

Keep up with what is going on in the world of personal aviation!

Do you want to mail in a regular, old-school check in instead? No problem! Pick what you want below and make the check out to Sport Aviaion Press and mail to PO Box 38, Greenville, IL 62246

Reach the people who are interested in personal flight.

If you are wanting to grow your light sport aviation business, Powered Sport Flying Magazine is the place to market. The magazine reaches active members of personal aviation. These are the people who are pilots, instructors, and fellow business owners.

And Powered Sport Flying magazine readers are some of the most adventurous pilots out there. They want to try new things. This year's airplane pilot may be next year's gyroplane pilot. And someone buying their magazine because of their interest in powered paragliding may end up in a trike. We hear from readers all of the time who are doing things just like that.

Here are some more reasons to become an advertiser:

Our media kit goes into detail about why you should consider advertising in Powered Sport Flying. It has ad sizes, prices, and information about the World Directory of Light Aviation.

Some of our Sponsors...

We appreciate their support!

If you want to subscribe online, please use the link below.

Do you have an address change? Would you like to list your flying event at no cost? Any other messages for us? The link below will send you to a secure form for any other reasons you may want to contact the magazine!